It's here! The WINGS to XFI swap 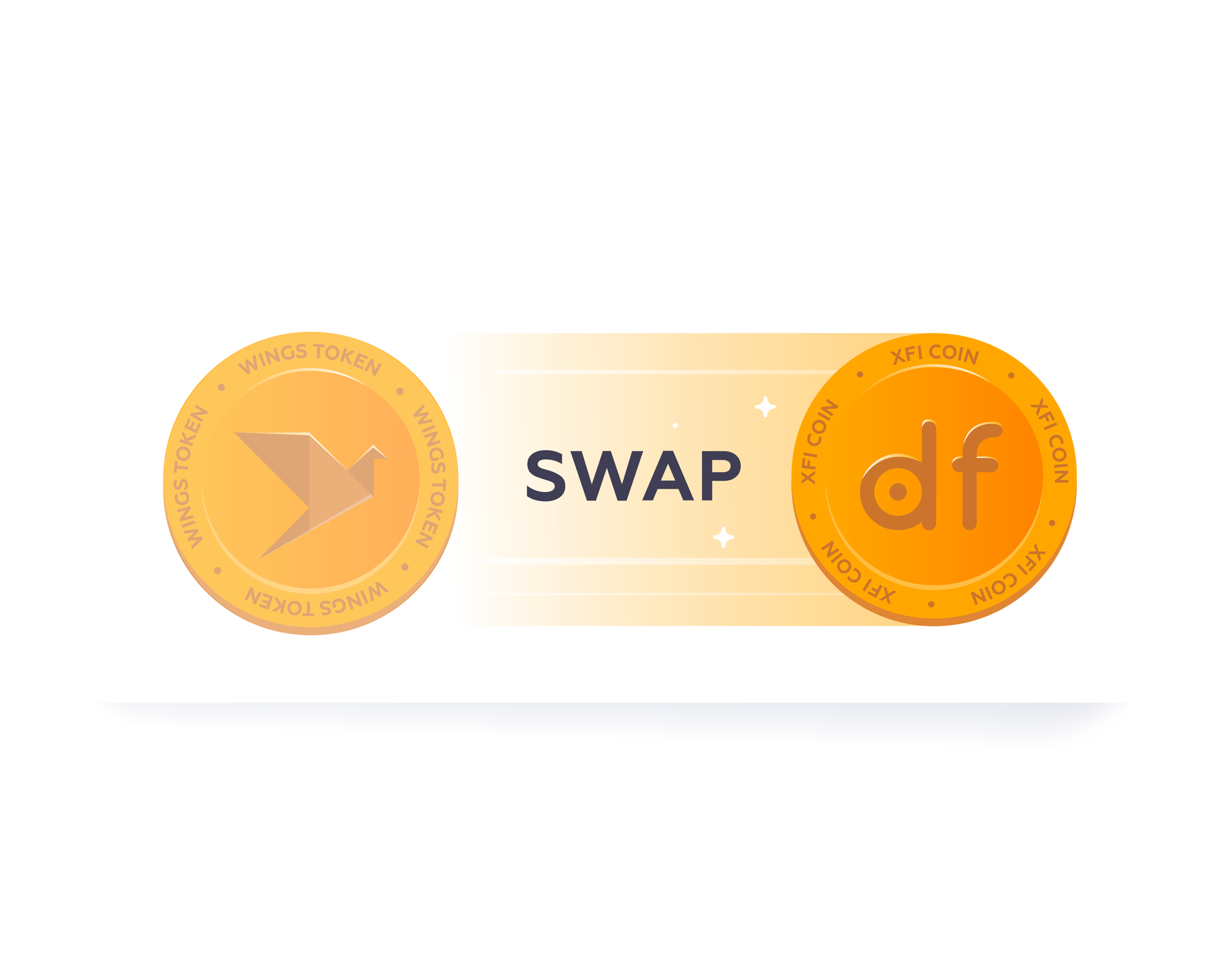 It’s finally here! After months of work, planning, and simulations, we now have the swap details for the WINGS to XFI (the Dfinance coin ticker) swap.

Treat with care: Please make sure you only use the official swap portal or, if you decide to swap directly, the correct smart-contract address - both of which will be made public using our official channels. Always check more than one official channel to verify information authenticity (for example website and Twitter). Also please be careful and do not use any unofficial Uniswap or other liquidity pools. Be vigilant and be wary of imposters.

Please note that due to regulation uncertainty the swap portal hosted by the Wings Foundation will be closed for US persons - we apologize for the inconvenience.

How will it work?

Note: XFI will be usable in the upcoming incentivized testnet which will enable XFI holders to earn staking rewards while testing the network. More details about the staking program will be published soon.

Have any questions? Read the short FAQ below. If you still need clarifications, please reach out to us on our social channels.

XFI is the ticker we have selected for the Dfinance network coin, which will be used for securing and fueling the network, and settling transactions.

Will the Dfinance network have inflation?

Yes, Dfinance will feature a built-in inflation mechanism in order to incentivize network participants such as validators which secure the network. More details about the inflation model will be released soon.

No, XFI is currently not trading anywhere and cannot be otherwise acquired. A Uniswap pool may be launched at a later date to allow everyone to participate in our upcoming incentivized testnet, however, details about it will be released using official channels at a later stage.

Why are you not allowing a 1:1 conversion during the entire period?

We are trying to bootstrap a new, significantly more advanced network and we want to give everyone the opportunity to join us on this exciting adventure. For this journey to be fruitful, we need to onboard an active and vibrant community. We feel that the swap model will help achieve that.

Won’t this lead to gas wars?

There’s absolutely no reason for anyone to try and rush in. Everyone that deposits during the first day receives the same swap ratio; even if someone doesn’t make the first day for whatever reason, the ratio on the second day only goes down by 1/182.

What will happen to the WINGS tokens sent to the swap contract?

WINGS tokens sent to the swap contract will remain in the contract for the entire swap period.

Since the Dfinance network is still in testnet stages, we decided to use an ERC20 XFI contract which will allow XFI to tap into decentralized platforms such as Uniswap while at the same time allow the Dfinance testnet to operate without balances concerns.

Why are we swapping from WINGS to XFI?

WINGS DAO was envisioned as an agnostic forecasting protocol, with ICOs being the first suitable use case for it. As ICOs disappeared, WINGS product-market fit was lost and thus the protocol became irrelevant. We then started researching and looking for a new direction and thus Dfinance was born. Dfinance is an entirely new ecosystem that uses XFI as its fuel. We wanted to give all WINGS holders a fair opportunity to embark with us on this journey.

Am I obliged to swap? What if I don’t want to swap?

What will happen to WINGS DAO?

We see the technology that powers the WINGS DAO as complementary to Dfinance and it is possible that we will launch a modified version of WINGS DAO on the Dfinance network, which will use the XFI coin and integrate with Dfinance instruments and perhaps even other networks.

Will I be able to swap after the swap period?

No, swapping will no longer be possible after the swap period has ended.

Why will the swap portal block US persons?

Without proper regulation guidelines, or in presence of regulation uncertainty, US persons are prohibited from participating. The Wings Foundation does the maximum possible effort to simply comply with regulations, we apologize for any inconvenience this may cause.

Can i just use a VPN to bypass the swap portal limitation?

Absolutely not, that is strictly prohibited. Please respect the rules and limitations.

I hold my WINGS on an exchange. Will they automatically be swapped?

No. Since the swap is optional, you will need to withdraw the WINGS tokens from the exchange and manually initiate the swap either by interacting directly with the smart contract or by using the swap portal hosted by the Wings Foundation.

Can i send WINGS to the swap contract directly from an exchange?

No. Since the swap is optional, you will need to first withdraw the WINGS tokens from the exchange to a personal wallet and only then initiate the swap either by interacting directly with the smart contract or by using the swap portal hosted by the Wings Foundation. Do NOT send WINGS to the swap contract directly from an exchange, you will lose you WINGS and the allocated XFI.

Will I be able to initiate the swap after the swap release date?

You may start the swap any time between the start date and the end date of the swap, however, please note that the amount of XFI received for 1 WINGS token is decreasing by 1/182 per day. In order to receive the 1:1 rate, you will need to start the swap on the first day.

What is WINGS DAO?

WINGS DAO is a decentralized forecasting platform for conducting due diligence and price discovery. It was launched in 2016 on the Ethereum network and its first use case was ICOs.

We want to thank everyone that supported us on our long journey and continues to support and help. In the meanwhile, please subscribe and follow us on our social media channels. See you all in our upcoming incentivized testnet!